Working with the Shadow in SoulCollage® CD 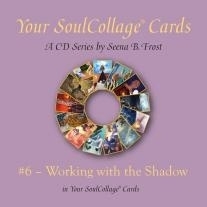 The Shadow (a term from Jungian psychology) is a concept that is referred to often in SoulCollage® work. It has to do with balance. Any form whether visible or invisible has the potential to lose its balance, to show its Shadow. When a form's energy becomes exaggerated or too much, we say it is manifesting Shadow. On the other hand, when a form's energy is absent when needed, this is also Shadow. W are trying to come to balance with any particular quality or part of us, finding that place where there is not too much or too little of a quality. All the cards except the Transpersonals have the potential for Shadow, and manifested Shadows will have different degrees of density.

The developer of SoulCollage®, Seena Frost, gives examples to help in recognizing Shadow, and to guide in the constant work of rebalancing shadowed Committee, Community, Companion, and Council cards in your SoulCollage® deck.